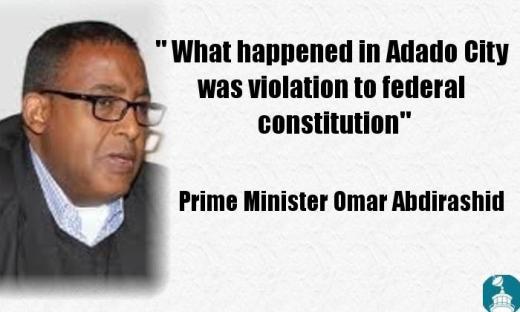 Prime Minister H.E.Omar Abdirashid said that what happened in Adado City was violation to federal constitution.

The truth is that if we violate the federal constitution then it is possible for everyone to violate and carry out illegalities therefore; it is the best time for our President H.E. Hassan Sheikh Mohamud and his Damu-Jadid Group to step down, and let’s do our cabinet work which they have been misleading since I took up this job until now.

Recently, as you heard several current cabinet ministers who exposed many internal corruptions which President H.E. Hassan Sheikh Mohamud and his close Damu-Jadid Group have been doing then I, as the Current Prime Minister Omar Abdirashid Ali have the right to tell Somalis and the world at large that Damu-Jadid Group had many times violated the federal constitution, and what President Hassan and his Damu-Jadid Group did Adado City was illegal and unconstitutional thereby; I urge them to stop their constant violations for the Federal Constitution otherwise; if they act above the law then everyone can do the same so, before things go into the wrong direction then we must come bank and use the Federal Constitution to form semi-autonomous state whether we like or not.

Truly, I previously built Jubbaland State where President H.E. Hassan Sheikh Mohamud and hid Damu-Jadid Group tried to dismantle for even arming and funding known warlords, and as you can read many published and divulged reports by the United Nations Monitoring Group on Somalia and Eritrea; Somalia is still the most corrupted nation in the world.

I am deeply sorry to hear that our Current Somali Minister of Finance H.E. Mohamed Adan “Fargeti” who has unconditionally exposed the internal corruptions of the Current Government through local and international media, and gues, he tells the truth that the Somali Public Servants had never recieved their salaries for 4 months so, we know exactly where we spent such missing public salaries!

I beleive that even Minister H.E. Hidig has also expressed his true vision through the VOA Somali Service about AMISOM and its devastating morale after they encountered several issues.

Well, 2 days ago the international community met at Halane AMISOM Base where they discussed Somalia’s future unfortunately, we missed to take part and lead such conference inside Somalia because we are not working together but we are working differently, and every Somali know now the truth in Mogadishu where we only control some districts during the day while during the night we can not walk or dive freely.

Actually, other problems include lack of hiring the right employees to the Security Apparatus agencies, and as many local journalists exposed that even members of the Shabab terrorists are working key government agencies including Somali National Intelligence and Security Agency.

I declare that the Somali Minister of Fiance H.E. Mohamed Adan “Fargeti” exposed the corruptions, and if we can not stop Damu-Jadid corruptions within the current cabinet then we will all nose dive into ashes.

Office of the Prime Minister
The Spokesman
Communications Department.