Prime Minister Benjamin Netanyahu recently met with the president of Somalia in a first high-level contact between the two countries, a source close to the Somali leader told The Times of Israel.

Israel does not have diplomaƟc relaƟons with the East African naƟon, which has a populaƟon of some 11 million. Somalia, a mostly Sunni Muslim country and a member of the Arab League, has never recognized the State of Israel.

Two weeks ago, a report on the Caasimada Online (hƩp://caasimadda.com/xasan-sheekh-oo-socdaal-qarsoodi-ah-ku-tagay-israel/), a news website operated by journalists opposed to the Somali regime, stated that President Hassan Sheikh Mohamud and three other Somali officials came to Tel Aviv on a short visit and met there with Netanyahu and other Israeli officials.

A senior official close to Mohamud confirmed to The Times of Israel that the meeƟng took place, though the official could not say whether it was held in Tel Aviv.

Another meeƟng between the two leaders is planned for the near future, the senior official said.

The source said there was also a lower-level official meeƟng in Jerusalem in December, involving representaƟves from the Israeli economy ministry and officials from Somalia.

Mohamud, who took office in 2012, is considered by some to be a reformer. In 2013, he was featured in Time magazine’s annual list (hƩp://Ɵme100.Ɵme.com/2013/04/18/Ɵme-100/slide/hassan-sheik-mohamud/)of the 100 most influenƟal people in the world. “The leader of Somalia’s first consƟtuƟonal government in 20 years, President Mohamud symbolizes an increasingly confident Africa that is shedding its long history of strife and moving toward greater stability and prosperity,” Rwandan President Paul Kagame wrote at the Ɵme.

Israeli officials on Tuesday refused to comment on the maƩer.

Netanyahu on Tuesday neither confirmed or denied a meeƟng with Mohamud in Tel Aviv. Responding to a quesƟon from The Times of Israel during a briefing with reporters, he replied: “I don’t want to answer your specific quesƟon. I can merely say that we have lot of contacts with countries that we don’t have formal relaƟons with. A lot of contacts.” Netanyahu is currently on a tour through four countries in Eastern Africa, including Kenya and Ethiopia, which borders Somalia. 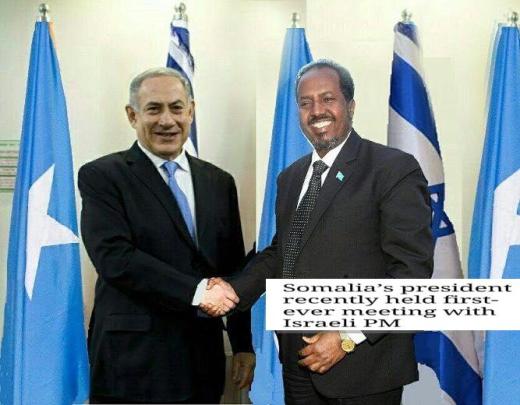