Twenty-five years of chaos in the Horn of Africa 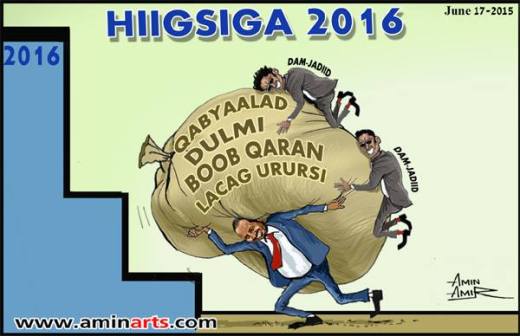 AT THE Coconut Beach Hotel, which opened last month, new guests are served coconut smoothies when they arrive. The rooms do indeed have a view of the ocean. What betrays where the hotel is, in Mogadishu, the war-torn capital of Somalia, are the two dozen guards in football shirts loafing around the doors clutching AK-47s. At the top of the stairs sits a machine-gun nest pointing at the gate. Aisha Abdulle Hassan, the proprietor, explains that she has invested $2m in the business. She is confident that it will soon be highly profitable. But she is taking no chances: “Our security is as tight as we could make it,” she says. “Only Allah knows if it is enough.”

Hotels are booming in Mogadishu. This is not thanks to tourists—only the most daring or idiotic would take a holiday in Somalia. Rather, the demand comes from power-brokers, who meet in them to discuss how to create a new government. This year Somalia is meant to hold elections, as part of the UN-led reconstruction effort. But even as peacemakers blather inside air-conditioned conference rooms, battle continues to rage outside. Hotels have become a target for militants. On August 30th a car bomb blew up outside one in Mogadishu, killing at least 15 people. After a quarter-century of costly foreign intervention, Somalia is still Africa’s most-failed state.

At no point since 1991, when the despot Siad Barre was overthrown by rebels, have Somalis had a government worthy of the name. Officials from Mogadishu cannot safely visit much of the country, let alone govern it (even excluding Somaliland, a region in the north that has been de facto independent since 1991). War, famine and terrorism have prompted legions of Somalis to flee. A sixth of them—2m out of a population of perhaps 12m—now live abroad. For those who remain, life expectancy is just 55 years, and barely a third can read.

Since 2007 Somalia has been occupied by armies from neighbouring countries, who—beginning with the Ethiopians in 2006—invaded to eject an incipient Islamist government in Mogadishu. The result was the creation of a Western-backed Somali transitional government, and a new enemy, al-Shabab, a splinter group from the Islamists. Al-Shabab immediately resorted to guerrilla war. In an effort to keep the jihadists at bay, Western governments pay for AMISOM, a force of 22,000 foreign soldiers operating in Somalia under a joint UN and African Union mandate.

Today, the Islamists control little in the way of towns. But Somalia remains deeply insecure. In Mogadishu, fearing kidnap or worse, foreigners generally confine themselves to the international airport—a sprawling compound protected by thick fortifications and Ugandan soldiers. Travel outside means taking a risk in a taxi or enlisting an armoured car. In other parts of the country, especially in the south, AMISOM troops live in fortified camps with thin supply lines, while al-Shabab wander into villages and operate as they please.

That is not to say there are no successes. At Villa Somalia, the bullet-pocked Italian-built Art Deco presidential palace, Mohamed Sheikh Hassan Hamud, the police commissioner, says that things have got better. A few years ago, at least one police officer was dying every day, he says. Today, it is five to ten a month. But his officers still cannot do much beyond escorting VIPs and guarding government buildings. Asked what he does to protect businesses from attacks, Mr Hamud answers: “We cannot protect them. They must have their own security.” That strengthens al-Shabab, because most firms choose to pay off the militants rather than risk attack.

Somalia has a federal system, which means in practice that outside the capital the central government controls almost nothing. It collects just $200m in taxes each year, UN officials reckon, mostly from the port in Mogadishu, and spends almost all of it on its MPs and the presidency. Elsewhere Somali statelets operate more or less independently—respecting Mogadishu in theory only. Some, such as Puntland in the north, are fairly well organised, with police and security forces. Others are little more than warlords’ fiefs.

The Somali National Army (SNA) is meant to keep people safe and hold the country together. Most independent observers agree with one UN official, who jokes that it “doesn’t actually exist”, at least as a cohesive force. British instructors brought in to train SNA soldiers have ended up training AMISOM instead. SNA commanders cannot say who or where their troops are, let alone what they are doing. There are soldiers, but they often desert and mostly owe their loyalty to clan leaders, not to Mogadishu.

This sets the context for the elections due this year. With no money and no army, the government can exert influence only with the consent of regional leaders. This is why elections involving people from all parts of the country and all Somalia’s major clans are vital. Somalia’s president, Hassan Sheik Mohamud, was selected in 2011 by MPs who in turn were selected by a group of around 135 clan elders. But though his term comes to an end on September 10th, negotiations about the structure of new elections, due by the end of the year, have dragged on endlessly.

Even if elections pass off well, it is unclear that they will deliver much legitimacy. One problem is that the entire process is dominated by diaspora Somalis. Some 55% of MPs have foreign passports, and while Mr Mohamud himself has never lived abroad, almost all of his advisers are either British or American Somalis. They are not always popular. For the moment, elections are the only hope, as donors’ patience is wearing thin.

In February the EU, AMISOM’s main funder, cut 20% from its budget for peacekeeping in Somalia. That followed a series of attacks on AMISOM troops which have led contributors to wonder whether it is worth it. Kenyan troops have all but stopped fighting this year. Uganda had planned to pull its troops out by the end of 2017, though President Yoweri Museveni is now considering keeping them in place.

A full withdrawal is unlikely. Compared with a decade ago, Somalia’s problems are more contained. Piracy has all but stopped; al-Shabab are a guerrilla army, but not a conventional one. People are generally not starving. All that would be undone quickly if the foreign soldiers left. But the real prize—a Somalia with a functioning government and safe streets—seems as distant as ever.